Shireshead 2nd XI continued their excellent season with a winning draw against Ingleton 1sts but will be disappointed they didn’t claim the maximum 15 points. Batting first Shireshead made 151 for  5 from their allotted 45 overs. Paul Yates made 33 at the top of the order in a 50 partnership with Ollie Wilkinson (27). The middle order fired as Gaz Bleasedale (23), Luke Bray (21) and Jake Agar (29) pushed the total towards a competitive target.

Despite 41 from Graham Kellet, Paul Yates (3-14) and Jake Agar (5 for 30) ripped the heart out of the middle order and despite a 24 run flurry from Dave Whitcombe supported by Melton and Gorst (17 and 12 respectively) Ingleton fell well short, claiming 3 points to Shireshead’s 10 points. 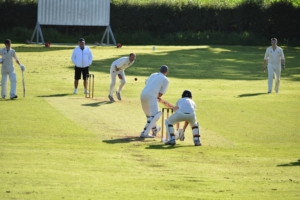 Paul Yates on his way to 3 for 14 against Ingleton.