Oh dear, oh dear, oh dear. High hopes and expectations for a League and Cup double for Simon Gould’s 2nd XI were dashed in spectacular style at the showpiece British Rose Cup final at Arnside on Bank Holiday Monday. In front of a bumper crowd of over 350. Shireshead batted first and set about things like they were in Antigua rather Arnside. An hour later they were reeling on 25 for 8 before veterans Paul Yates and Phil Oliver guided them to a paltry total of 75 for 8. After Bleasedale was caught in the deep in the first over, Ste Yates followed immediately after eyeing up the pavilion roof but failing to connect, bowled for one of four ducks in the innings. Further ill advised stroke play from Gould snr, Coates, Gould jnr followed. Meanwhile the Cartmel bowlers were putting together some very nice bowling figures with Joe Atkinson taking 3 for 11, David Unsworth 3 for 17 and Joe Cowperthwaite 2 for 18. However, Phil Oliver (25 no) and Paul Yates (17 no) put together a much needed partnership of 50 for the 8th wicket, playing circumspectly, being hamstrung (literally in Oliver’s case) by the debacle that preceded. 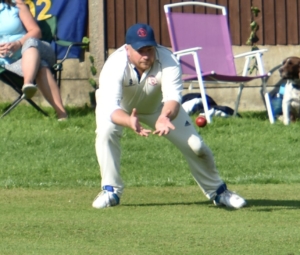 Early wickets, accurate bowling and faultless fielding were essential if Shireshead were to stand a chance. We got one out of the three. William Anderson was coolly caught on the boundary for 6 off Agar and at 11 for 1 there was glimmer of hope. Jonathan Cooper (25) and Rob Davies (17) played with the moderation necessary when chasing a low total. Gould clean bowled Cooper with an inswinging yorker but the bowling in general was too loose to threaten. A direct hit from Bleasedale from the boundary removed Davies but this brought the pugnacious South African Weir to the crease who hit three fours and fittingly, a six to end the contest in the 16th over.