Shireshead firsts were back to winning ways on Saturday with a 179 run victory over Trimpell at Clifton Park, and a much needed maximum of 15 points. After being inserted on a damp and difficult surface Shireshead set about the bowling with great purpose as 16 year old Ollie Wilkinson made a promising first team debut making 16 in a first wicket partnership with Tom Jacques  of 69. Wilkinson’s innings included a fine six to the square leg boundary. After Wilkinson departed, Jacques followed suit immediately after but not before hitting 44 including 8 fours and a six. Rob Skipworth (38) carried on the momentum along with Joe Cunliffe(19) taking Shires to 142 for 4 before Cunliffe was caught smartly in the covers by Thompson. Skipworth’s fine innings came to an end as he  advanced down the wicket only to be stumped by Churton off Wilson. Joe Oliver meanwhile was putting together a meaningful innings the highlight being a reverse sweep to the square leg boundary for four.

Jack Dodd added impetus, as did Phil Oliver and Shires posted 193 for 9 in their 45 overs. 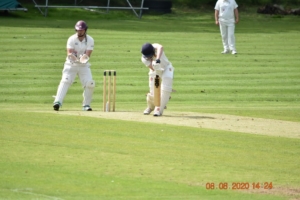 Ollie Wilkinson with a text book forward defensive in his debut match for Shires firsts.

Nobody could realistically envisage what was to come in the next hour as Trimpell were obliterated for only 14 with Dave Jack producing the remarkable figures of 6 overs, 5 maidens, 7 (SEVEN) wickets for only 2 runs, supported admirably by the ever improving Josh Smethurst with 5 overs, 3 wickets for 12 runs. The bowlers were supported by some fine fielding with spectacular catches from Mike Mead and Joe Oliver at slip. A sterner test follows next week against Heysham at Clifton Park but for the moment Shires can enjoy the rare feeling of victory which had until now eluded them this season. 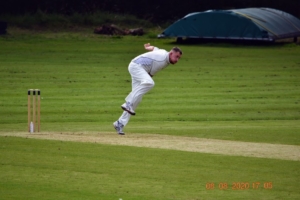 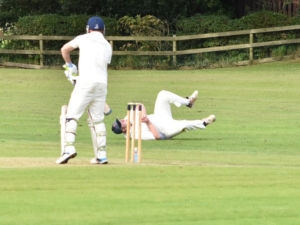 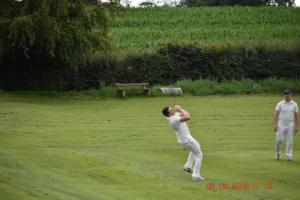 Oliver Wilkinson taking a fine catch in the deep