Once again Shireshead ladies team cast aside all opposition to win the Fleetwood Softball Tournament on Sunday. With two six-a-side teams entered, both teams won all of their games and Shireshead A and B teams met in the final.

Two teams each from Fleetwood, Lytham and Fullwood competed but the Fillies were too strong in all departments. In the words of Sue Swire – “Despite horrendous hangovers by many but not all ( Jess and Amy), the ladies teams of Shireshead absolutely smashed the competition at Fleetwood over the weekend. Both teams won all three games only to meet each other in the final. Some great catching by Louise Day, Amy Creed, some stonking batting by Michelle and Jo, to name but a few, it was truly wonderful to watch the dirty dozen!”

A huge thanks to the many Shires supporters who cheered on the teams and enjoyed the day with the ladies. 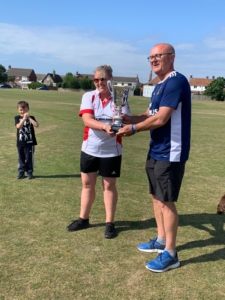