Following defeats last Saturday and on Thursday in the Division Cup, both to Heysham, Shireshead 1st XI were second best again against Westgate at Clifton Park in an abbreviated 34 over league game. Dave Jack’s men posted 97 in 33.4 overs after being asked to bat in damp conditions and a testing surface. Despite this there were some promising signs with bat and ball and Jack hopes that they can carry these improvements forward into next week’s important game against Bare. Without opener Tom Jacques, Dodd fell early but Adam Murphy (30) and Robert Skipworth (15) looked like taking the home side into a competitive position. However, the slow bowling of Nisbett ( 3 for 17) and Buchanan (4 for 22) meant that free scoring was difficult and only Phil Oliver with 15 including a trademark 6 into the field could manage double figures.

Jack and Smethurst began aggressively with the ball for Shireshead and Jack (3 for 23) comprehensively clean bowled Tattersall for a duck and had Buchanan smartly caught at slip by Mike Mead for 6. However, Westgate captain Hill (28 no) and the ever ebullient Dylan Conroy (49) put on a match winning partnership and despite Conroy being bowled by Jack, Westgate reached their target in the 26th over and claimed 12 points and 7 wicket victory, leaving Shireshead still waiting for their first points of the season. 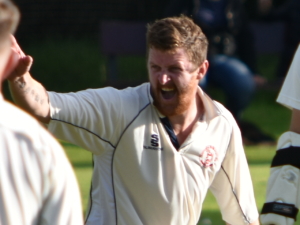