Shireshead 2nd XI had a convincing winning draw in their opening match of the shortened 2020 season at home to Cartmel 1sts at Clifton Park on Saturday.The team had a good blend of youth and experience that looks exciting for the rest of the season. New skipper Simon Gould led the way with bat and ball and new recruits Jake Agar and Jack Cunningham impressed as did Luke Bray making 55 in a key partnership with Gould (59).

Batting first Shireshead made 172 for 9 and it was the partnership between Bray and Gould of 89 that put them in a strong position at the tea interval as only Jake Gould with 11 could manage double figures. In reply, Cartmel looked in a strong position to win as openers Hughes and Anderson both made 40 in a partnership of 79 for the first wicket. However only Cartmel returnee Rob Davies with 22 had an impact as the middle and lower order were dismissed quickly with Tuson and Callon holding out, Cartmel’s innings ending on 142 for 8 after the allotted 45 overs. For Shireshead the pick of the bowlers were newcomer Jack Cunningham with 5 for 20 off 12 overs and Simon Gould himself with 3 for 30 off 8 overs. 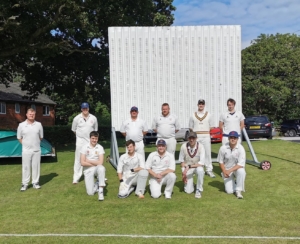